Growth will decelerate in 2019

Growth will remain strong in 2019; but will decelerate slightly owing to external headwinds. The slowdown in the Chinese economy and the global trade war will weaken trade growth: exports represent over 190% of Hong Kong’s GDP, and over 50% of these are re-exports to mainland China. Investment growth might stall on the back of weaker sentiment stemming from uncertainty regarding the trade wars and tighter credit conditions in line with the US FED’s tightening. Hong Kong’s currency board pegs the Hong Kong dollar to the US dollar, and this mandates that the Hong Kong Monetary Authority (HKMA) mirror FED rate hikes. There is a risk that private consumption, which accounts for 68% of GDP, could decelerate as higher rates imply higher debt repayment costs. At the same time, the sector will continue to benefit from better tourism revenues, low inflation, and a tight labour market (unemployment rate stable around 2.5%), which should spur real wage growth. Inflation will remain limited in 2019, even considering strong demand and wage increases, as imported inflation will be reduced with the Chinese renminbi’s depreciation. Rent price pressure should also decrease. Higher interest rates could translate into sluggish housing prices, which may also drag on consumption through the wealth effect. Chinese tourist numbers (75% of total visitors) will likely decline due to slower economic growth in mainland China and the depreciation of the RMB relative to the HKD.

In addition, Hong Kong port activity, a hub of global trade, is expected to continue to grapple with increasing competition from larger, more cost-effective ports in mainland China. The growth of financial services will remain dynamic.

The budget balance will remain in surplus in 2019. Moreover, the budgetary situation of the Special Administrative Region (SAR) is solid in view of large reserves, representing above 20 months of expenditure. Even if spending increases slightly following from new infrastructure investments, revenues from land and property sales should remain robust, provided the correction in housing prices is mild – our baseline scenario. Public debt will remain virtuallynon-existent.

The trade balance will deteriorate slightly as goods imports grow faster than exports. The same trend will be observed in the secondary income balance given the amount of exiting remittances. However, the current account will remain in surplus thanks to the significance of resident and local firms’ foreign income repatriation.

Banks should remain strong, even in case of a steep correction in housing prices, thanks to household debt limits and regular stress tests performed by supervisory authorities. In addition, Hong Kong is a top global initial public offering (IPO) centre, and the connection between the Hong Kong and Mainland Chinese stock exchanges, which enable foreign investors to trade listed securities in Shanghai/Shenzhen and vice versa, further cements the city’s role as a financial hub.

The new head of the executive power embodies continuity

Carrie Lam was elected as Chief Executive by the Electoral College, in which the pro-Chinese camp has a majority. All three candidates were proposed by a committee set up by Beijing. Carrie Lam was elected in 2017 and will remain in power until 2022. The legislative council remains dominated by a pro-Beijing majority that supports the Chief Executive’s policy stance, limiting any potential discontent from China. Her following of the “one country, two systems” principle will entail curtailing of advocacy for greater autonomy, or independence of Hong Kong. In September 2018, a political party was banned for the first time since Hong Kong’s handback in 1997: the Hong Kong National Party, a small pro-independence party. The Chief Executive will pursue another controversial policy goal: bringing the school curriculum closer to China’s “patriotic” model of education. Popular discontent and political tensions have been a source of concern for the city, as the growing influence from mainland China is not favoured by all. The newly opened bridge and train line are good examples: although both infrastructure developments offer economic benefits, they also pose a specific challenge in relation to the location of customs and border controls. To manage discontent, the government will continue to target funds at youth programs and increase the availability of housing. Internationally, the signature of a free-trade agreement with the ASEAN will favour economic relations with other ASEAN countries.

Bank transfers are one of the most popular payment instruments for international and domestic payments in Hong Kong, thanks to the territory’s highly developed banking network.

Standby Letters of Credit also constitute reliable payment methods, as the issuing bank guarantees the debtor’s credit rating and repayment abilities. Irrevocable and confirmed documentary letters of credit are also widely used, as the debtor guarantees that a certain sum of funds will be made available to the beneficiary via a bank, once specific terms agreed by the parties are met.

Cheques and bills of exchange are also frequently used in Hong Kong.

During the amicable phase, the creditor sends one or more notice letters (summons) to the debtor, in an attempt to persuade them to pay the due debts.

The Practice Directions on Mediation, introduced in 2010, set out voluntary processes that involve trained and impartial third party mediators. This helps both parties involved in a dispute to reach an amicable agreement for repayment. Debtors and creditors are usually urged to pursue this process before resorting to legal action.

Hong Kong’s District court and High Court allow legal representation. Cases in these courts are initiated by issuing a Writ of Summons to the debtor, who then has 14 days to file a defence. The creditor is also required to file a notarised Statement of Claim. If the debtor responds to the Writ and requests a payment plan, the creditor has two weeks to reply. If the parties find it impossible to enter into an agreement, a hearing will be called for by the judge, during which a judgment is normally made. If the debtor does not respond, a default judgment can be rendered.

Enforcement of a legal decision

A domestic judgment is enforceable once it becomes final (if no appeal is lodged within 28 days). If the debtor fails to comply with the judgment, the creditor can request an enforcement order from the court. This usually entails either a garnishee order (allowing the creditor to obtain payment of the debt from a third party which owes money to the debtor), a Fieri Facias order (which enables a bailiff to seize and sell the debtor’s tradable goods), or a charging order (for seizing and selling the debtor’s property to satisfy the debt).

Foreign judgments are enforced under the Foreign Judgments (Reciprocal Enforcement) Ordinance. Decisions issued in a country with which Hong Kong has signed a reciprocal treaty (such as France or Malaysia) only need to be registered and then become automatically enforceable. Where no such treaty is in place with a country, enforcement can be requested before the court, via an exequatur procedure.

An “Arrangement on Reciprocal Recognition and Enforcement of judgments in Civil and Commercial Matters” (REJA) was concluded with the People’s Republic of China in 2006. This makes judgments rendered in Mainland China or in Hong Kong automatically enforceable by the courts of the other contracting party.

The only formal insolvency procedure under the Companies Ordinance Act is liquidation.

The law does not provide for formal procedures for restructuring company debts. Restructuring proceedings therefore need to take place through informal “workouts” or a scheme of Arrangement.

A workout is an out-of-court agreement made between a debtor company and its major creditors for the rescheduling of its debts. This proceeding can be initiated at any time. Restructuring plans are usually recommended by a committee which is chaired by a lead creditor. The courts are not involved and the process is entirely voluntary. Once a plan has been agreed, the company continues to operate and is managed under the terms of the arrangement. This procedure does not provide legal protection from creditors.

Creditors can initiate a compulsory liquidation by filing a winding-up petition with the courts on the grounds of insolvency. An MVL is a solvent liquidation process whereby all creditors are to be paid in full and any surplus distributed among the company’s shareholders. CVLs are insolvent liquidations.

The Hong Kong Government Gazette’s Companies (Winding Up and Miscellaneous Provisions) Ordinance 2016 (“Amendment Ordinance”) entered into force on February 13, 2017. These updates have been introduced in order to increase protection for creditors and to streamline and improve regulations under Hong Kong’s corporate winding-up regime. 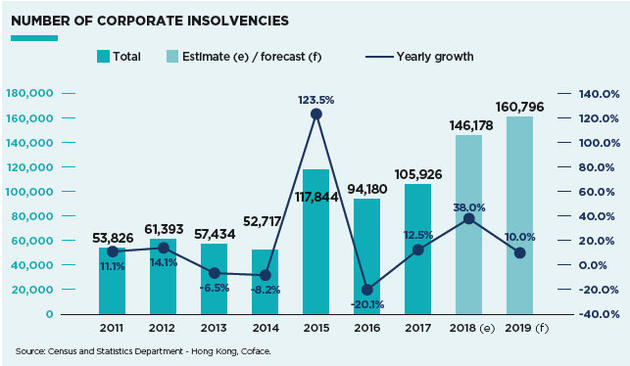