Growth is expected to weaken in 2019, in large part due to the selective power cuts in the first quarter of the year that were carried out by the public utility company Eskom (which supplies more than 90% of the country's electricity supply). These cuts notably penalised the manufacturing and mining sectors. The agricultural sector, affected by the El Niño climate phenomenon, will also limit the expansion of activity. Due to the weakness of these sectors, the contribution of foreign trade to growth – which could also be affected by the external context (Brexit and trade tensions in particular) – will likely remain negative.

Cautious in the run-up to the May 2019 general elections, private investment growth will remain constrained in the second half of the year, particularly due to uncertainties related to land reform, which would allow expropriations without compensation. As with public consumption, the contribution of public investment will be constrained by the country's limited fiscal room for manoeuvre. In addition, the construction sector –particularly affected by the recurring difficulties of public companies – is unlikely to experience a significant rebound.

Private consumption is expected to be relatively more dynamic, supported in particular by the introduction of a minimum wage and by the reduction of the central bank's key policy rate, stimulating household demand and extending credit. The service sectors are expected to be the main beneficiaries of this trend. However, structural constraints, such as high unemployment and shortages of skilled labour, will weigh on household consumption.

Despite the easing of monetary policy and increases in fuel and electricity prices, low domestic demand pressure is expected to maintain moderate inflationary pressures.

An economy exposed to twin deficits

The budget deficit is expected to remain high in fiscal year 2019/20. Revenue growth is expected to match GDP growth and remain low, while no tax increase is expected. Indeed, after the VAT increase in 2018, the Treasury indicated its intention to refrain from raising income and corporate taxes. The cost of debt service, which absorbs almost 14% of revenues, will further burden spending. With the general elections, budget cuts are all the more limited. However, spending increases are also expected to remain contained, while the economic stimulus and recovery plan, presented in September 2018, will be financed by a revision of the budgetary guidelines.

Despite the reforms, the financial situation of public companies – starting with Eskom – remains worrying and poses a risk to public finances. The government was therefore obliged to increase its financial support to the electricity company, including a promise of 230 billion rand (~USD 16 billion) over the next decade to enable the company to remain solvent. As a result, the debt burden is expected to continue to increase. The country will therefore remain exposed to further downgrades in its credit ratings, which would affect the cost of borrowing. Nonetheless, the low proportion of foreign currency debt (about 10%) and short-term debt mitigates the risk. The banking sector's exposure to public debt could threaten its health, but in a difficult economic environment, the sector continues to demonstrate some strength.

In 2019, the current account will remain in deficit, mainly due to the repatriation of profits from foreign companies, which is weighing on the income account. Payments to Southern African Customs Union partner countries will maintain the deficit in the transfer balance. The increase in the trade surplus, thanks in particular to the depreciation of the rand, should allow the current account deficit to narrow slightly. The financing of the deficit will still largely depend on portfolio investment flows. Nevertheless, these would remain volatile due to domestic political uncertainty, weak growth, twin deficits, and the threat of a downgrade in credit ratings. The volatility of capital flows will feed pressure on the rand and foreign exchange reserves (which cover about 4.5 months of imports).

Succeeding Jacob Zuma – forced to resign by his African National Congress (ANC) –, President Cyril Ramaphosa took office February 2018. In May 2019, the positions of ANC and President Ramaphosa were confirmed at the general elections, with 57% of the vote. Although this allows the ANC to maintain its absolute majority, this score – as well as voter turnout (66%) – is the lowest since the end of the apartheid regime (1994). Insufficient in the eyes of some ANC factions, this result could slow down the reforms desired by the president. Moreover, despite the enthusiasm that followed his appointment, President Ramaphosa was quickly caught up in the country's socio-economic challenges: anaemic growth, endemic unemployment, and persistent inequalities. In addition, the president's efforts to restore the credibility of governance and anti-corruption after the Zuma era, marked by the "state capture" affair, have been hampered by the admission of a questionable payment used to finance the president's campaign to head the ANC.

The split issue of expropriations without compensation, with the aim of accelerating the redistribution of land to black owners, will remain a major concern for investors in the coming months. It could degrade the perception of the business climate if the proposals in this area infringe property rights. However, the operating environment has deteriorated relatively favourably, as evidenced by the 48 rankings lost in the Doing Business ranking over the past decade (82nd out of 190 countries in the 2019 edition).

Electronic Funds Transfers (ETF), including SWIFT payments and international transfers, are used for payments in foreign currencies. Cheques are rarely used, outdated, expensive to process, and vulnerable to fraud. Cheque payments are also subject to a clearing period of 10 working days. The majority of businesses no longer use them. Cash payments do still occur but have the same disadvantages. Letters of credit are issued between banks and serve as a guarantee for payments made to a specified person under specified conditions, including imports and exports. In most cases, irrevocable credits and confirmed irrevocable credits are issued. The terms and conditions can be onerous and should be fully understood before acceptance of these letters. Parties can sometimes secure payment on delivery via bank guarantee. Monies are deposited into a bank account, and the bank in turn issues a guarantee for payment on confirmation of delivery. This type of payment is mainly used in matters pertaining to property transfers.

The National Credit Act states that the creditor must try to contact the debtor via a phone call, before issuing a formal letter of demand (outlining the outstanding obligation, and sent via email, registered post, or delivered by hand). Once this is done, the parties attempt to negotiate a settlement over an acceptable period of time. As creditors are not obliged to accept payment in instalments, they can opt to proceed with legal action to secure a full one-time payment. This phase is much less costly than immediately proceeding with legal action. This phase also provides greater insight for preparing for the litigation phase. Depending on the nature and value of the claim involved, it is sometimes possible to skip this phase and proceed immediately to litigation.

The administration of justice and application of law in South Africa is carried out by the civil and criminal courts. The ordinary courts are the district and regional magistrates’ courts, the provincial divisions of the High Court and the Supreme Court of Appeal. The Constitutional Court is the highest court for constitutional matters. Specialist courts have been established for various legal sectors, including Labour Courts, the Land Claims Court, Special Income Tax Courts, and the Electoral Court.

Determining whether to proceed in a lower court or in the High Court will depend on the type and value of the claim. Decisions of the lower courts can be passed for review or brought to appeal in the higher courts. Some types of cases can only be heard by the High Court, regardless of the quantum of the claim. As a general rule, a court will exercise jurisdiction on the basis that the defendant is resident or domiciled in the area of the court, or if the cause of action arose in that area.

Proceedings in the Magistrates and Regional Courts generally involve a trial (action) process. Motion (by way of affidavit) proceedings are limited to certain cases only. The High Court can hold both trial (action) and motion (application) proceedings. In action proceedings, the process commences with a summons and is concluded with a trial stage, where witnesses give testimonies. With application (motion) proceedings, the matter will be determined with reference only to written documents and, as a general rule, no oral evidence is permitted. Evidence is set out in affidavits and cannot be contested by cross-examination. Although motion proceedings were generally quicker and cheaper than actions, applications can now end up costing more than action proceedings. When the court is faced with an application in which it is evident that there is a material dispute of facts between the parties, it will then refer the matter to trial.

The alternative to court proceedings is to refer the dispute or claim to arbitration, although few parties are willing to agree the required costs. Arbitration can be faster than court processes and the costs of proceedings are divided equally between the parties. Disputes or decisions at the arbitration hearing can be reviewed through an application to court. Arbitrations can be made an order of court by application, for the purposes of execution.

The High Court deals extensively with execution against property, whether movable or immovable. The rules of the Court provide for the attachment and sale of property in order to satisfy the judgment made on the debt.

Foreign judgments are enforced in South Africa by way of provisional sentence proceedings. They are not directly enforceable. The courts which pronounced the judgment must have had the necessary jurisdiction required to entertain the case, according to the principles recognised by South African law on the jurisdiction of foreign courts.

A compromise can be initiated by a resolution of the board of directors, or by direction of a liquidator. They can propose a compromise to all creditors, or a specific class of, creditors and must notify the Companies and Intellectual Property Commission (CIPC) of the proposal. A receiver is appointed to supervise the process. The proposal must be approved by a majority of at least 75%, in value, of the relevant creditors or proxies present at the meeting. If the proposal is accepted, it can be presented to court for confirmation. Once confirmed, the order must be filed by the company with the CIPC within five days.

Liquidation proceedings for a company begin with either a court order on the request of any persons and on the grounds set out in the Companies Act 2008, a request for voluntary liquidation, or an application to court by the shareholders, the creditors, or the company for liquidation (when the company is insolvent). A liquidator is appointed to wind up the company. The liquidator collects all the assets and claims due to the company, sells them and distributes the proceeds amongst the creditors. It is essential that the creditor lodges its claim with the liquidator, regardless of whether it has a judgment or a court order. Once all the proceeds have been distributed, the liquidator files its final liquidation and distribution accounts and makes any payments set out within it. The liquidator then advises the Master of the High Court that the administration of the estate is complete. 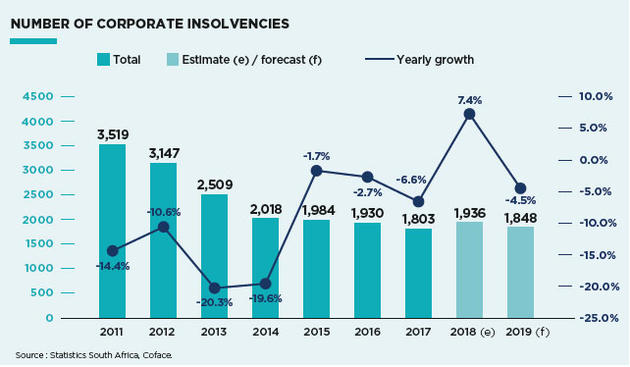