Sluggish growth, absence of inflationary pressures, ever more expansionary monetary policies and increased volatility in financial markets; these are four elements characterising the global economy in early 2016. This phenomenon seems recent for all countries with one exception: Japan, which has been bogged down in this situation for about 20 years. The lessons from the Japanese “guinea pig” give little ground for optimism: although monetary policy has been highly expansionary for a long time, it has been insufficient to jump-start growth, as providing cheap credit to kick-start demand is of no use in absorbing the excess capacity on the supply side. And as time passes, its detrimental side effects are increasingly visible, as the excess liquidity it creates is giving rise to volatility in financial and real estate markets. So it seems very difficult for a country that has fallen into the stagnation trap to pull out of it. This is of small consolation for companies: despite the weak growth outlook, the fact that financing conditions remain very favourable enables them to survive in a “Japanised” economy. This is confirmed by the decline in company insolvencies in most advanced economies over the last few months, despite a moderate level of growth in activity.

In addition to this Japanisation trend, the global economy in early 2016 is still affected by the impacts of the erratic commodity price fluctuations on emerging countries. After Latin America and African countries, it is the turn of the Middle East and Asia to suffer, which has led Coface to assign a negative outlook to the A4 country rating for Saudi Arabia as well as to the A2 rating of Kuwait, to downgrade Oman to A4, Kazakhstan to C, Malaysia to A 3 and Armenia to D. Obviously not forgetting Japan, which is now in A2. 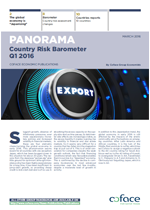 
Companies in emerging countries: Can we once again believe in the Phoenix miracle?

Czech Republic, Poland, Chile, and Thailand closest to a quick upturn in exports